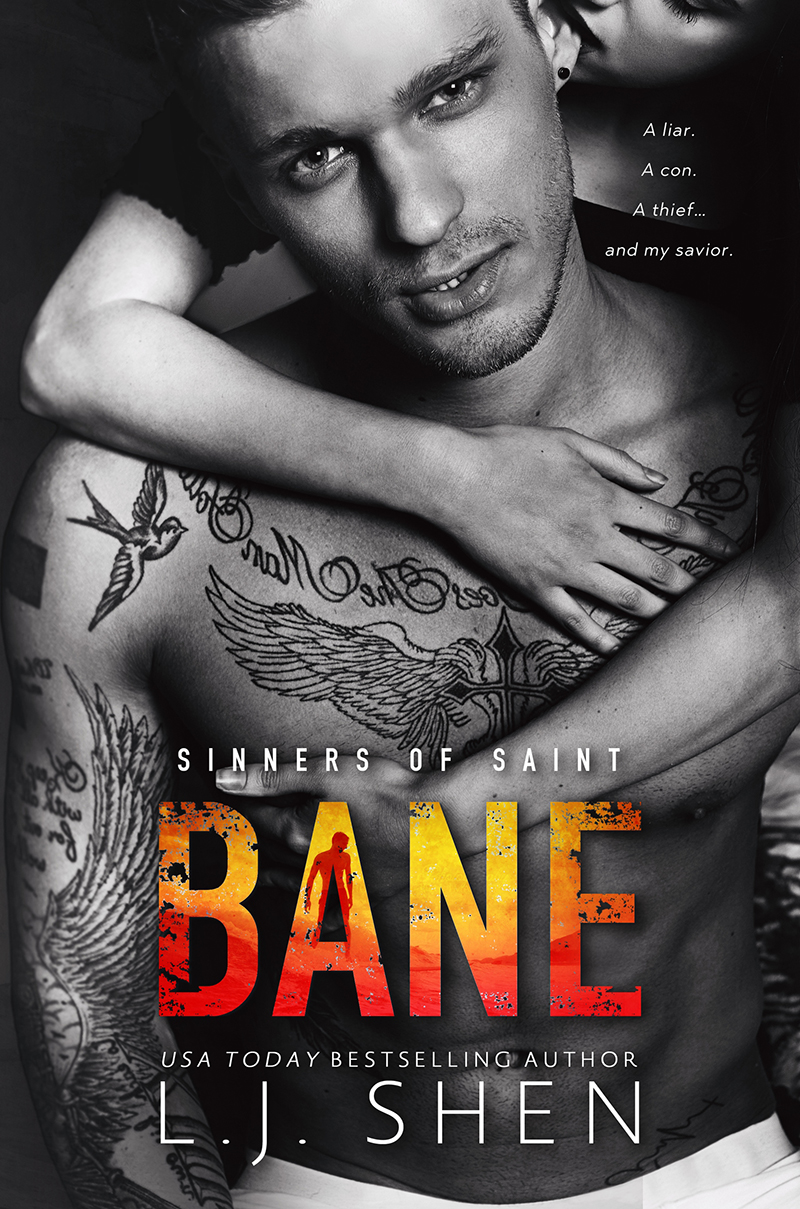 Bane, the highly-anticipated next standalone in the Sinners of Saint Series by L.J. Shen is LIVE

Naked surfer. Habitual pothead. A con, a liar, a thief and a fraud.

Last I heard, he was extorting the rich and screwing their wives for a living.

Which is why I’m more than a little surprised to find him at my threshold, looking for my friendship, my services, and most puzzling of all—looking humbled.

Thing is, I’m on a boycott. Literally—I cut boys from my life. Permanently.

Problem is, Bane is not a boy, he is all man, and I’m falling, crashing, drowning in his sweet, perfect lies.

Hot as hell, cold as ice.

I wasn’t aware of her existence until a fat, juicy deal landed in my lap.

She’s a part of it, a little plaything to kill some time.

She is collateral, a means to an end, and a side-bonus for striking a deal with her oil tycoon stepdad.

More than anything, Jesse Carter is a tough nut to crack.

My reputation was a big wave that I rode, one that swallowed everyone around me, drowning every attempt to fuck with what’s mine.

I’d been known as a stoner, but power was my real drug of choice. Money meant nothing. It was tangible, and therefore easy to lose. See, to me, people were a game. One I’d always known how to win.

Move the rooks around.

Change the queen when necessary.

Guard the king at all fucking times.

I was never distracted, never deterred, and never jealous.

So, imagine my surprise when I found myself being all three at once.

It was a siren with coal black hair who robbed me of riding the biggest wave I’d seen that summer. Of my precious attention. Of my goddamn breath.

She glided from the ocean to the beach like nightfall.

I crouched down, straddling my surfboard, gawking.

Edie and Beck stopped beside me, floating on their boards in my periphery.

“This one’s taken by Emery Wallace,” Edie had warned. Thief.

“This one’s the hottest masterpiece in town.” Beck had chuckled. Con.

I had all the ingredients to pull her in.

Her body was a patch of fresh snow. White, fair, like the sun shone through her, never quite soaking in. Her skin defied nature, her ass defied my sanity, but it was the words on her back that made my logic rebel.

It wasn’t her curves or the way she swayed her hips like a dangling, poisonous apple that warranted my reaction to her.

It was that tattoo I had noticed when she swam close to me earlier, the words trickling down the nape of her neck and back in a straight arrow.

My Whole Life Has Been Pledged to This Meeting with You

I only knew one person who went gaga over the Russian poet, and, like the famous Alexander, he was currently six feet under.

My friends began to paddle back to shore. I couldn’t move. It felt like my balls were ten tons heavy. I didn’t believe in love at first sight. Lust, maybe, but even that wasn’t the word I was looking for. No. This girl fucking intrigued me.

“What’s her name?” I snatched Beck’s ankle, yanking him back to me. Edie stopped pedaling and looked back, her gaze ping-ponging between us.

“What’s. Her. Name?” I repeated through a locked jaw.

“I will not repeat myself a third time.”

Beck’s throat bobbed with a swallow. He knew damn well that I didn’t mess around. If she was legal—it was on.

Jesse Carter was going to be mine before she even knew me.

Before I even knew her.

Before her life turned upside down and her fate rewrote itself with her blood.

So here was the truth that even my lying ass wouldn’t admit later on in our story—I wanted her before.

Before she became business.

Before the truth caged her in.

Before the secrets gushed out.

I never did get to surf that day.

Should have known it was an omen.

My heart was going to be next in line.

And for a small chick, she did one hell of a fucking job obliterating it. 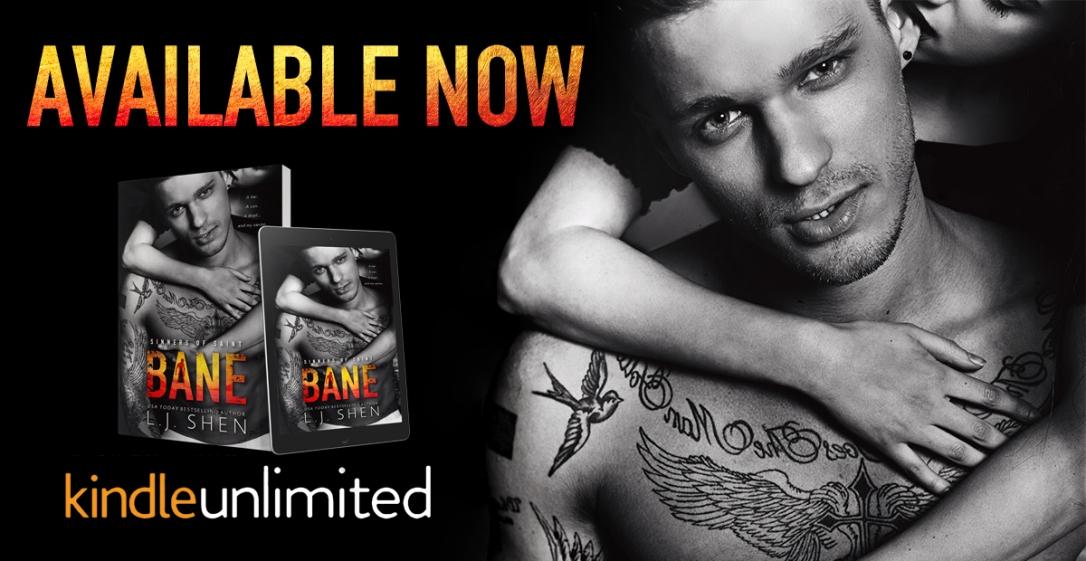 Amazon US I Amazon Universal

Start the Series of Standalones Today!

Amazon US I Amazon Universal

L.J. Shen is an International #1 best-selling author of Contemporary Romance and New Adult novels. She lives in Northern California with her husband, young son and chubby cat.

Before she’d settled down, L.J. (who thinks referring to herself in the third person is really silly, by the way) traveled the world, and collected friends from all across the globe. Friends who’d be happy to report that she is a rubbish companion, always forgets peoples’ birthdays and never sends Christmas cards.

She enjoys the simple things in life, like spending time with her family and friends, reading, HBO, Netflix and internet-stalking Stephen James. She reads between three to five books a week and firmly believes Crocs shoes and mullets should be outlawed.

Bane is one hot and steamy read that you will definitely have a hard time putting down once you read the first few chapters. LJ Shen’s books will always make you root for the bad boys and that what has got me so intrigued in the first place. Bane is a brooding and tortured hero that is really too charming for his own good. And he’s exactly the kind of guy that Jesse Carter needs to coax her out of her shell. Amidst all the tragedy, betrayal, and lies; there was love, passion, and affection.

Personally, I think this book is one of LJ Shen’s best work. I read all the Sinners of Saint series and while Vicious will still have a special place on my romance bookshelf, Bane might have topped that. I just simply loved how the author portrayed Jesse’s struggles of being a rape victim and how she coped with it. She dealt with the aftermath of the incident while the whole town shamed her, even her parents.

It’s no wonder why she and Bane were truly made for each other. They understood each other’s pain and motivation and they accept each other for who they really are. Despite their difficult past, they have found a way to be with each other without prejudice, just love.

View all posts by themeanieneen

This site uses Akismet to reduce spam. Learn how your comment data is processed.