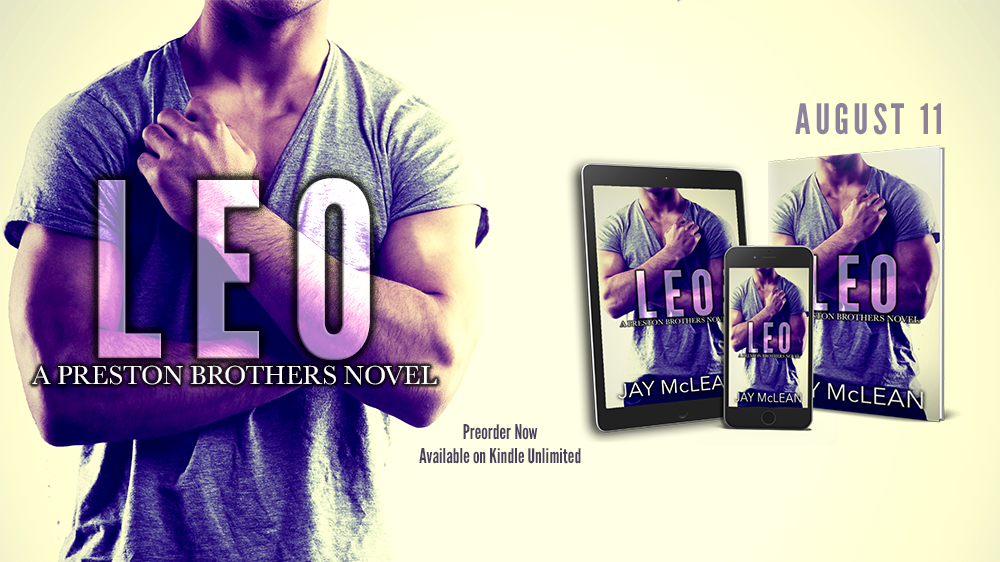 Coming AUGUST 11 from Jay McLean is LEO, the third book in the New Adult/Coming of Age Series, The Preston Brothers. Pre-order today!! 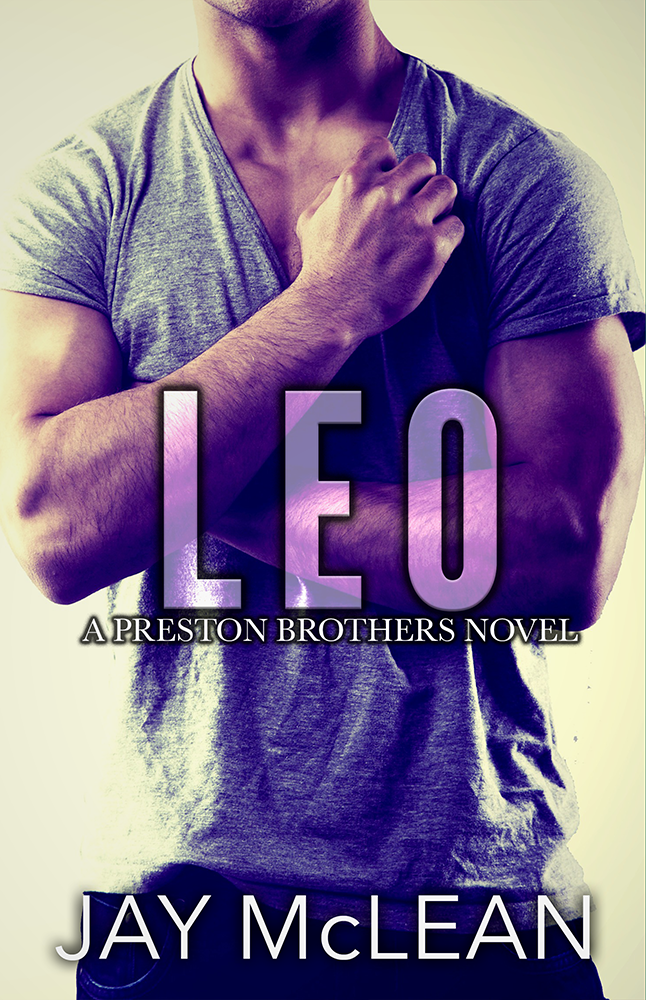 One single summer changed them forever, and one moment of devastating silence destroyed it all.

Growing up with six siblings, Leo Preston has always struggled to find his voice.

While his brothers are loud, greedy, and somewhat obnoxious, Leo is forever the quiet one.

He watches his life pass by as an outsider in his own world, absent and alone.

Until he finds her.

For Leo, Mia Kovács is like a prize, a gift wrapped in passion and devotion.

And she’s his—his very own secret he doesn’t have to share.

Together, they can overcome anything…

heartache and destruction, guilt and regret.

Mia gives Leo everything he didn’t know he needed,

including her fragile heart.

The only thing she doesn’t give him…

are secrets of her own. 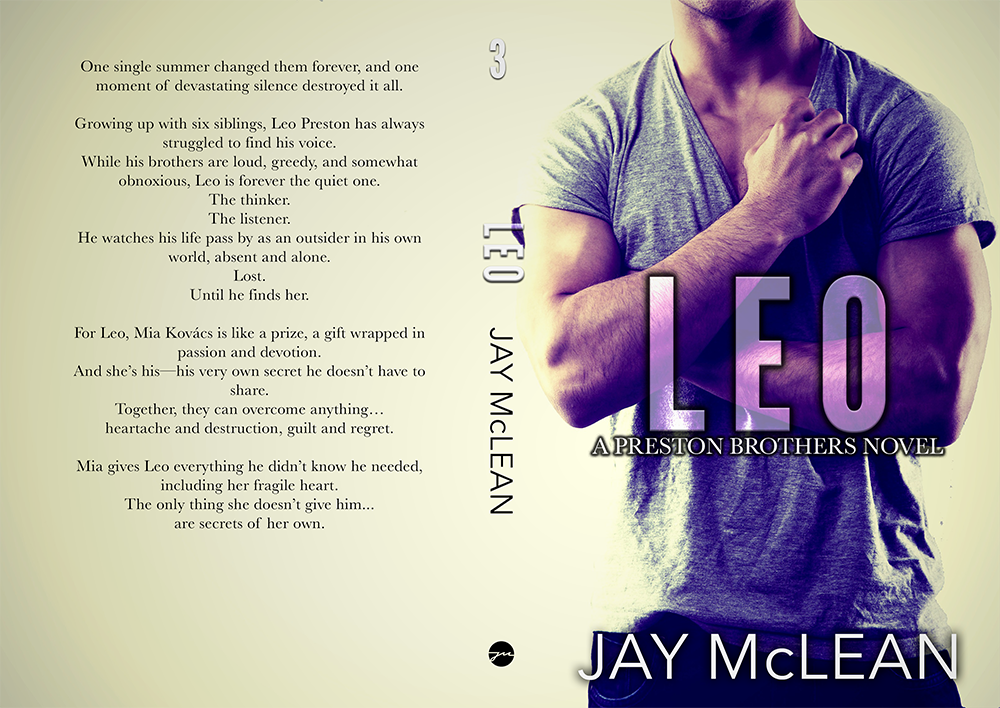 To celebrate the cover reveal of Leo, Jay McLean is giving away a $50 Amazon Gift Card! Stop by her Facebook page to enter! 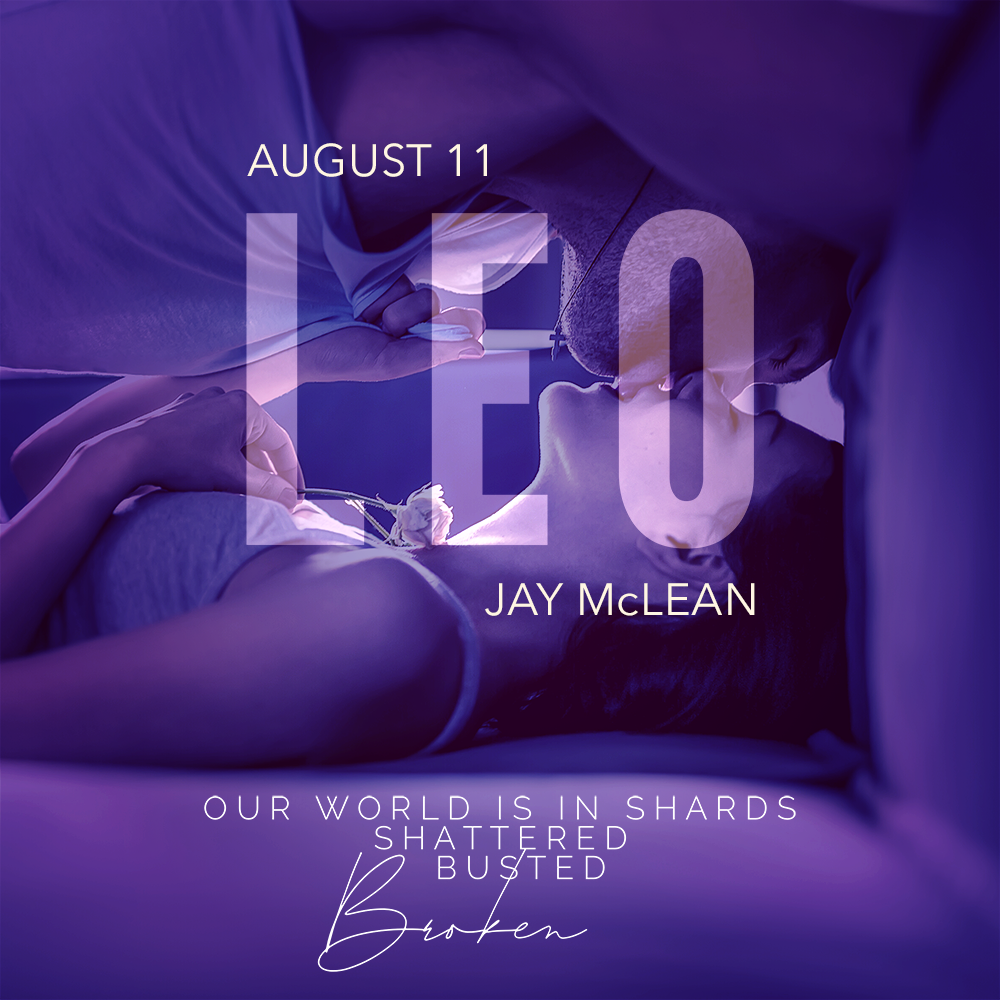 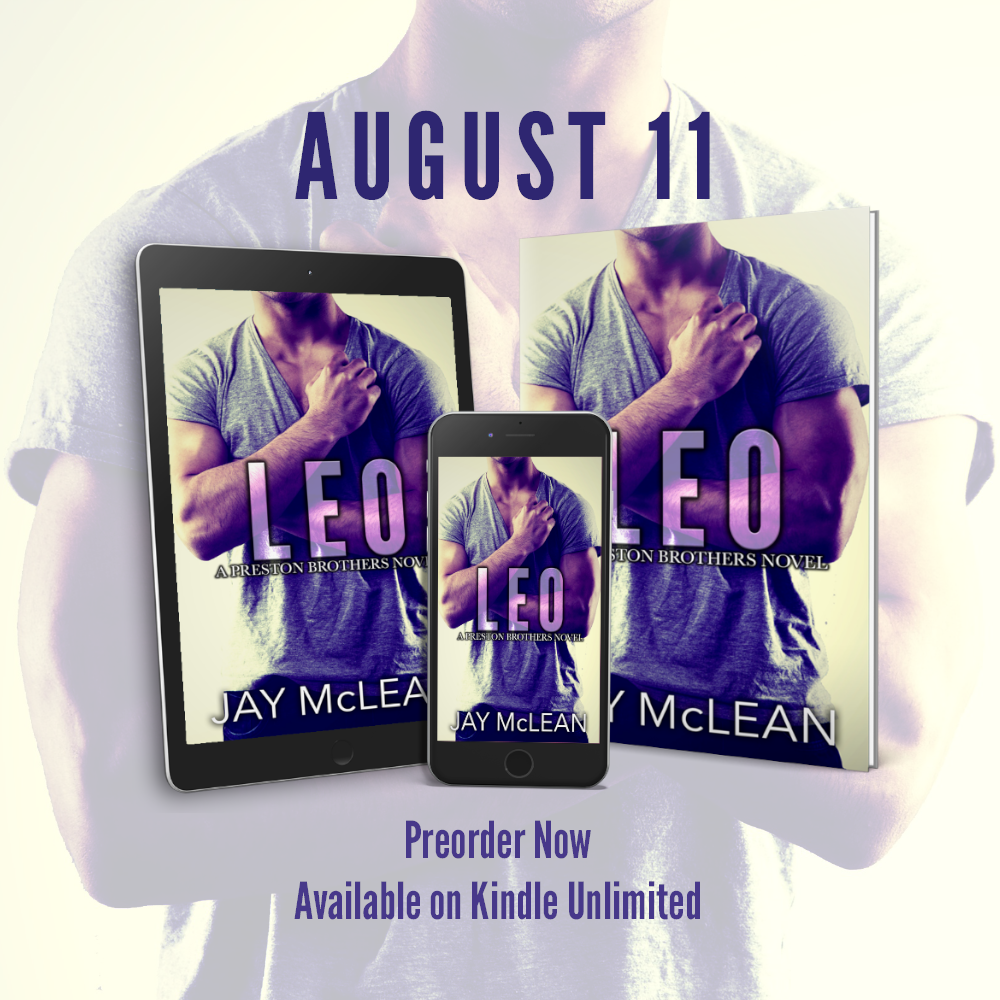 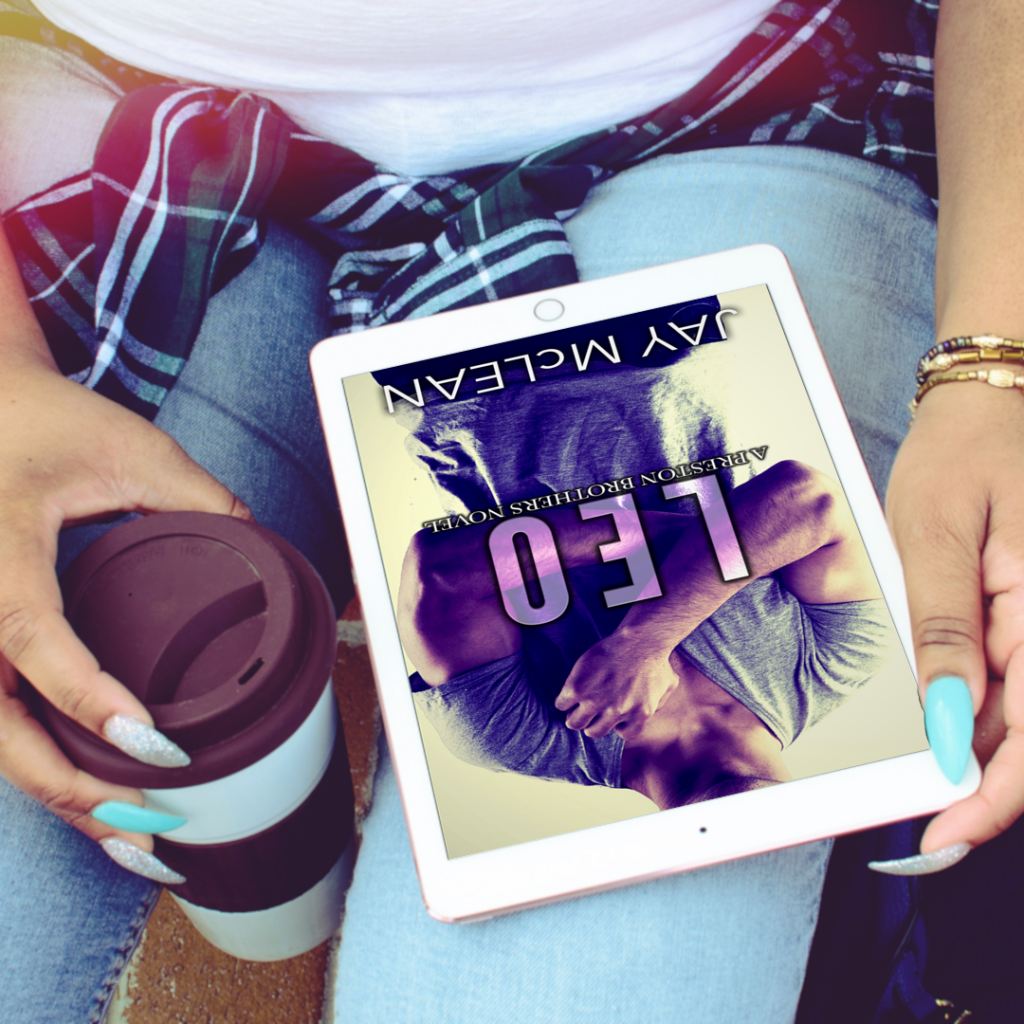 Jay McLean is a full-time reader, writer of New Adult and Young Adult romance, and skilled procrastinator. When she’s not doing any of those things, she can be found running after her three boys, investing way too much time on True Crime Documentaries and binge-watching reality TV.

She writes what she loves to read, which are books that can make her laugh, make her hurt and make her feel.

Jay lives in the suburbs of Melbourne, Australia, in her dream home where music is loud and laughter is louder.

Title: Until Talon
Series: Until Him #4
Author: Aurora Rose Reynolds
Genre: Contemporary Romance
Cover Design: RBA Designs
Photo: Michelle Lancaster
Model: Chad Hurst
Release Date: August 4, 2020
Blurb
When
Mia Allenton’s sister calls, asking her for help after finding out her husband
cheated, Mia packs up her life in Montana and moves to Tennessee to be there
for her and her three girls. As Mia begins to settle in, a tornado comes
through, bringing along with it Talon Mayson, a man determined to prove to her
that good men do exist.
Talon
knows he’s got his work cut out for him when it comes to earning Mia’s trust,
but slowly her walls start to crumble, and they begin to build something
beautiful. Unfortunately, someone from Talon’s past isn’t happy about him being
back in Tennessee, and they’re willing to do anything to prevent him from ever
being happy.
Is
the Boom between Talon and Mia strong enough to weather the storm that’s
coming?
ADD TO GOODREADS
Pre-order Links
AMAZON US / UK / CA / AU
B&N / KOBO / APPLE BOOKS
BOOKS2READ
Author Bio

Aurora Rose
Reynolds is a New York Times, USA Today and Wall Street Journal bestselling
author whose wildly popular series include Until, Until Him, Until Her,
Underground Kings and Shooting Stars.
Her writing
career started in an attempt to get the outrageously alpha men who resided in
her head to leave her alone and has blossomed into an opportunity to share her
stories with readers all over the world.
Author Links
FACEBOOK
TWITTER
WEBSITE
GOODREADS
INSTAGRAM
Giveaway

Title: Starlet
A Sinister Fairy Tales Collection Standalone
Author: Cora Kenborn
Genre: Dark Romantic Suspense
Release Date: June 25, 2020
Blurb
They call me America’s Sweetheart.
Hollywood royalty. The last of an era.
Sole survivor of LA’s most infamous crime.I’m not any of those things.
He forced me into the spotlight.
The liar with a perfect smile and cold blue eyes.But Alexandra Romanov’s fate won’t be mine.
I’ll speak her lines. I’ll hit the mark. I’ll strike a pose.
And when the past and present collide, I’ll become their worst nightmare.

They told me to preserve the legacy.
Be careful what you ask for. . .
You just might get it.

Author note: This book contains dark themes, graphic and
violent content, and sensitive subject matter that while essential to the
storyline may make some readers uncomfortable.
ADD TO GOODREADS

Excerpt
“Angel, I’m…” The word sorry is right there on my lips, but instead of
saying it, I slam them against hers before either of us can react. Angel’s
muffled protest is trapped between our mouths, and her palms fly to my chest as
if to push me away. Only she doesn’t. Her fingers curl into my shirt, those
sharp nails digging into my skin.
My control breaks. My hand dives into her hair, twisting it around my
fingers. We kiss harder, ignoring the fact we’re in a public parking lot. And
when she moans into my mouth, I lose it and push her against the car.
“Stop.” Angel breaks the kiss, her chest rising and falling with labored
breaths as she pulls away. Her fingers press against her swollen lips as if
they will somehow erase the feel of mine.
They won’t.
Because like it or not, when I want something, I get it. I wanted out of
this mess, so I made her an offer that would make history.
But now…
We’re going to rewrite it.
However, Angel has to be handled carefully, so I play the apologetic
asshole role with gusto. Stepping back, I rake a hand through my hair. “That
was out of line.”
She crosses her arms over her chest. “You think?”
Sighing, I press my thumb against my temple and throw out a final Hail
Mary. “Look, what do you have to lose? A crappy apartment and a worthless job?”
For some reason, that seems to get to her, and she relaxes the grip her
arms have on her chest. “What’s in it for you? And be straight with me this
time. No more of this half-answer crap. I want the truth.”
“A story.”
Angel raises her eyebrows and glares at me.
I roll my eyes. “And money. Look, I don’t care how much a man has,
five-hundred-k is five-hundred-k.” It’s the truth, something I didn’t mean to
throw out there, but my master plan is going down in flames pretty fast.
“That’s another half-answer,” she accuses, and then twists around to walk
away, but I catch her arm and spin her back around.
“Fine, you want the truth? You don’t get to where I am in life and not
step on a lot of toes along the way, sweetheart. Some were by accident, and
others were very much on purpose. Somebody didn’t like what he saw in the
mirror I shoved in front of his face and decided to take it out on my ass. If I
don’t get some cash flow soon, I’m going to lose everything.”
An awkward second of silence quickly turns into five. Then ten. Just as
I’m about to do something drastic like speak the name of a man who should never
be used as a bargaining tool, she sighs.
“Fine.”
Wait, what?
“Fine?”
“I know I’ll live to regret this, but I can’t argue that half a million
would change my life.”
“So, that’s a yes?” I ask, slowly. “You’ll do it?”
“Yes. Provided you guarantee the DNA test will prove I’m Alexandra
Romanov, you’ve got a deal.”

Cora
Kenborn is a USA Today Bestselling author who writes in multiple genres
from dark and gritty romantic suspense to laugh-out-loud romantic comedy. Known
for her sharp banter and shocking blindsides, Cora pushes her characters and
readers out of their comfort zones and onto an emotional roller coaster before
delivering a twisted happily ever after.
Cora
believes there’s nothing better than a feisty heroine who keeps her alpha on
his toes, and she draws inspiration from the strong country women who raised
her. However, since the domestic Southern Belle gene seems to have skipped a
generation, she spends any free time convincing her family that microwaving Hot
Pockets counts as cooking dinner.
Oh, and
autocorrect thinks she’s obsessed with ducks.

I never thought that the retelling of Anastasia Romanov would have me so thrilled that I literally couldn’t put my copy down until after I read the Epilogue. And because I’m a 90s Disney baby and an avid fan of historical documentaries, this book got me so hooked the moment I learned that it’s a retelling of Anastasia. It was so captivating that it had me singing Journey to the Past in my head!

I loved how the story revolved around the glitz and glamor of Hollywood. It was really interesting how the author came up with a plot inspired by Anastasia. This dark retelling is the perfect homage to the story woven from the history of the real Romanovs.

Dominic and Angel had the perfect push-and-pull romance. As the story unravels, you cannot help but be totally invested in them. Dominic may appear to be a gruff con man, but underneath that hardened exterior, you will find the devotion of a man who will protect the one he loves. And Angel’s character was so enigmatic that you can’t help but sympathize and love her. Amidst all her traumatic secrets is a girl full of courage and grit.

I loved how each of the plotlines was so intricate that at the end of the day, even if you know when the biggest twists are going to be revealed, you can’t help but still be surprised at the unexpected turns.

This is one hell of a book from the Sinister Fairy Tale collection and it’s one of the best ones out there. I’ve read quite a few of them at by far I can definitely say that this belongs in at least the Top 3!